by Voice of British Muslim Women 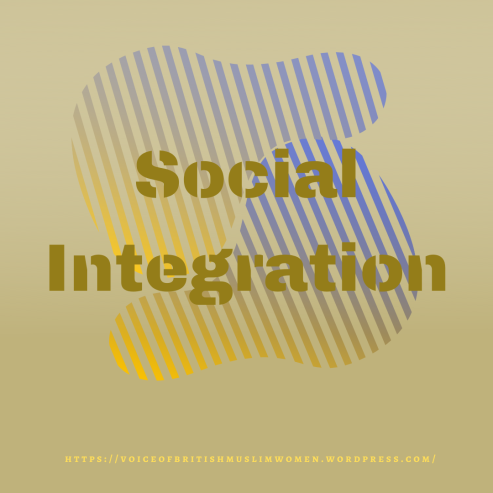 Modern Britain is full of people of different faiths from around the world mixing with a traditionally Christian, white population. Potentially this could cause problems and has done at times, when newcomers have been seen as intruders bringing with them their strange ways.

Actually, for a Muslim there is no conflict between Islam and other faiths or peoples, and Muslims who choose to live in a predominantly non-Muslim country are fully a part of it and just as loyal as they are to a country of their own faith. His Holiness Mirza Masroor Ahmad, worldwide head of the Ahmadiyya Muslim Community, said in December 2012:

“Islam… actually commands us to be absolutely loyal and devoted to our country of residence. Indeed, the Holy Prophetsa particularly emphasised that love for one’s nation is a part of faith for any true Muslim.” i

True loyalty and devotion can be shown by integrating into society.

Sometimes minorities have heavily populated certain areas, for example Jews in Golders Green, north London or South Asians in Southall which has led to accusations that they are not integrating. Visible Muslims seem more pressured to integrate partly because of their different way of dressing and partly as a backlash against Islam in these days of terrorism and conflict. Muslims, especially women, are told many times they should ‘fit in’ to modern Britain by discarding their ‘archaic’ head coverings and conforming to modern Western practices.

However there is actually no need to discard symbols of our faith or stop practicing any aspect of it in order to integrate into society; it is entirely possible to become part of our local community whilst staying true to our faith. There are Muslim men and women across the country working in different jobs while still practicing their faith without compromise; the female doctor or teacher working in her hijab, for example, is a very visible sign of integration. As well as this Muslim men and women continue to perform their five daily Prayers or keep fasts without neglecting their work, something which is not obviously visible. Muslim students go to university and are able to participate fully in student life without drinking alcohol the way their non Muslim peers may be doing, and in fact often find their friends keep in mind that they won’t be drinking for religious reasons and so don’t pressure them.

Showing loyalty to our nation is one aspect of becoming part of the society in which we live, and this can be done literally, for example by joining the police force or army as well as by small day-to-day sacrifices of our time or money in order to benefit our local communities. Looking after the welfare of friends and neighbours or volunteering in schools are ways Muslim women can contribute to society even if they are not working.

There have been reports from time to time of local councils being reluctant to put up Christmas decorations to avoid offending local Muslims; many could be offended but the headlines always lay the blame on Muslims, which results in an increase of hostility towards Islam with accusations that Muslims are not integrating. However, most Muslims aren’t offended if their non Muslim neighbours celebrate their festivals; if our neighbours celebrate Christmas we can and should give them greeting cards and gifts to show we wish them well. We can also send them something at Eid and tell them we would like to share our celebration with them.

My local mosque, the Mubarak Mosque is situated in an area that is traditionally not diverse and its opening made me think about the importance of integrating into society rather than being cut off from it. At the inauguration of the mosque on 29th June 2019 His Holiness, Mirza Masroor Ahmad summed it up perfectly and his words are guidance for all Ahmadi Muslims, and, indeed, other minorities, to follow:

“Ever since we came here, we have sought to assimilate into the local society and this is proved by the fact that many of you are our old friends and acquaintances… Certainly, we have no desire to live an isolated existence, rather we desire to integrate and to be responsible citizens who serve and benefit the local community.

Indeed, this is what I believe to be the definition of true integration – to be entirely loyal to your country of residence, to uphold the laws of the land, to serve your local community and to use whatever skills or capabilities you have for the betterment of your nation.” ii

If these words were followed all newcomers would integrate smoothly into society leading to an ideal situation for everyone.

← Innovations in Religion
Islam and Democracy →